We Dream of a Dream

It was a spring morning when I went to a lakeview school to take part in CommunityAction’s shadhinota challenge. I never participated in any kind of community service before so I didn’t know what was in store for me. After the usual ice-breaking activities which included a fun-filled marble race we headed off to learn a bit about community action and community service. Bappi bhaiya gave all of us a fantastic presentation and I was really inspired. Later on we were divided into 3 teams. I was assigned to the group who will work with ‘visually impaired’ girls. Before the team selection I was secretly hoping to belong to this group because I really wanted to work with ‘visually impaired people and luckily I got into my desired project. For our very first task we were asked to make a plan in a chart paper. We named our group Bindu and our project ‘Shopno’. We named it shopno because we wanted the blind girls to see dreams through us.

We were given a document by Sohaila Apu where it was written that we have to complete a project where we have to help the girls at Baptist Mission Integrated school make handicrafts according to their ability. Now we thought that must not be very difficult. We first decided to hold an exhibition where we could display the handicrafts and then raise fund for the girls. But this idea failed about which I will be talking later on.

Now the following day two of my team members Lisa from IBA and Nadi and I went to the school at Mirpur. We were expecting a small school with few students. But when we went there we were really impressed with the school. It had a huge field and two buildings. One, for residence and one for attending classes. Principal Sylvia welcomed us. She gave us lots of data and information regarding the school and the condition of blind girls in general. We were shocked to hear the lack of assistance from our government and were very inspired by the schools success. 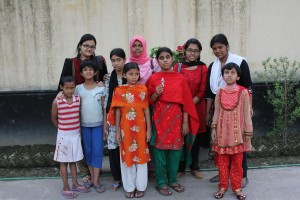 With some students of BMIS

After our initial introduction the teacher took us inside the school. The teachers gathered all the girls together. We first introduced ourselves to the student and this was a very heartwarming moment for me. The girls were so cheerful and responsive and so happy to see us that I had to hold back my tears. I never expected that I would find such lively students in this school. The girls have already suffered so much in life but still they were smiling and introducing themselves to us. We started by asking them their names and what they like to do. All of them like to sing. I was very surprised to see their choice of music. They loved mostly ‘chora gaan’ and the elder students liked ‘rabindra sangeet’

We dream of a dream

Then some of the singers among the students sang a beautiful song for us with tablas and harmoniums.

Later on we asked the teachers to send some girls for interview. Each of us interviewed two girls. We had to interview the girls personally for our report. The interview went well. The girls opened themselves up and talked to their hearts content. They took our contact number and we promised to keep contacts with them.

We had our group meeting few days later. We decided that arranging an exhibition would be both time consuming and expensive so we decided to market the product on face book. Due to our uploaded pictures our friends were already willing to help us with the project so we decided that selling the handicrafts online would be the best possible idea. 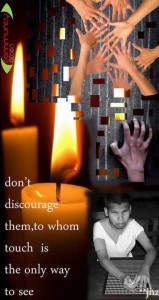 Encourage them to stand

Lisa, Maliha and I went to Newmarket and bought some materials for the girls. We also bought few CD’s which they requested. We bought the audio version of Rabindnath’s ‘Shesher Kobita’ for them.

On our next visit I was accompanied by Afsana , Maliha and Suchi. Four of us went to BMIS on the 7th to make greeting cards. The girls were very pleased to see us the second time. We made various cards with them using chart paper, water color and pencils. The girls wanted to make more greeting cards with us but we didn’t have much time. Finally we made 25 cards and took leave from them. We took photos with the girls and gave them stickers as gifts and they entertained us with their music. 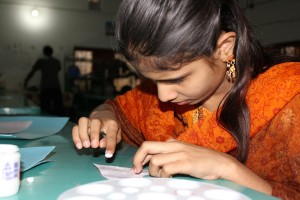 She is working with full concentration from heart

From then on we Bindu, started looking for customers. Luckily we didn’t have to look much. People got so interested that we readily finished selling many cards. At one point the demand for handicrafts exceeded our supply. We have very little time for selling but finally managed to raise 3575 taka. This amount with our CA money that was given to us in the beginning to carry on with the project amounted to 7100 taka. We were very glad. We didn’t expect to sell so much in only two days. 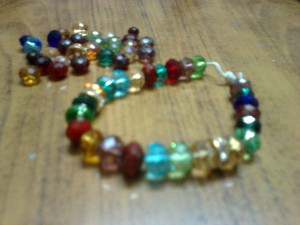 Working with the blind girls has been an experience of a lifetime for me. I never imagined that I would be able to help others in such a noble way. We, team Bindu are very grateful to CA for giving us this opportunity and would love to work with the visually impaired girls in the future since we believe we have developed a lifelong relation with some of the girls at BMIS .

– Written by a member of team: Shopno